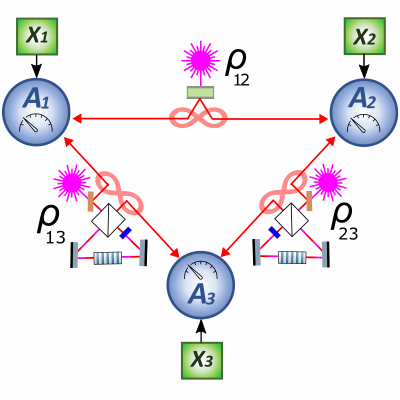 A joint paper between Sapienza, International Institute of Physics and Perimeter Institute on the observation of genuine nonlocality in a triangle network has been published in PRX Quantum!  Quantum networks are the center of many of the recent advances in quantum science, not only leading to the discovery of new properties in the foundations of quantum theory but also allowing for novel communication and cryptography protocols. It is known that networks beyond that in the paradigmatic Bell’s theorem imply new and sometimes stronger forms of nonclassicality. Due to a number of practical difficulties, however, the experimental implementation of such networks remains far less explored. Going beyond what has been previously tested, here we verify the nonlocality of an experimental triangle network, consisting of three independent sources of bipartite entangled photon states interconnecting three distant parties. By performing separable measurements only and evaluating parallel chained Bell inequalities, we show that such networks can lead to a genuine form of tripartite nonlocality, where classical models are unable to mimic the quantum predictions even if some of the parties are allowed to communicate.