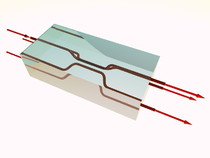 The main features of quantum mechanics reside into interference deriving from the superposition of different quantum objects. While current quantum optical technology enables two-photon interference both in bulk and integrated systems, simultaneous interference of more than two particles, leading to richer quantum phenomena, is still a challenging task. Here we report the experimental observation of three-photon interference in an integrated three-port directional coupler realized by ultrafast laser-writing. By exploiting the capability of this technique to produce three-dimensional structures, we realized and tested in the quantum regime a three-photon beam splitter, namely a tritter, which allowed us to observe bosonic coalescence of three photons. These results open new important perspectives in many areas of quantum information, such as fundamental tests of quantum mechanics with increasing number of photons, quantum state engineering, quantum sensing and quantum simulation.