Boson sampling is a computational task strongly believed to be hard for classical computers, but efficiently solvable by orchestrated bosonic interference in a specialized quantum computer. Current experimental schemes, however, are still insufficient for a convincing demonstration of the advantage of quantum over classical computation. A new variation of this task, scattershot boson sampling, leads to an exponential increase in speed of the quantum device, using a larger number of photon sources based on parametric down-conversion. This is achieved by having multiple heralded single photons being sent, shot by shot, into different random input ports of the interferometer. We report the first scattershot boson sampling experiments, where six different photon-pair sources are coupled to integrated photonic circuits. We use recently proposed statistical tools to analyze our experimental data, providing strong evidence that our photonic quantum simulator works as expected. This approach represents an important leap toward a convincing experimental demonstration of the quantum computational supremacy. 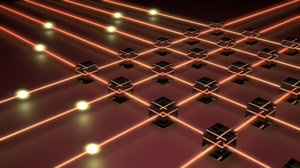