Like its predecessors, the fifth meeting of the “Quantum Information and Measurement” conference is sponsored by The Optical Society (OSA) and attracts a vibrant and broad audience.

With the rapid progress in quantum technologies, both theoretical and experimental, we plan on broadening the scientific scope envisioned for this meeting. The conference topics will cover the latest in theoretical developments and experimental implementations of quantum information technology, including the advanced engineering needed to realize such technologies.

In addition to the conference’s traditional focus on quantum optics and photonics, the fifth QIM conference will also include other platforms for quantum technologies, broadly construed, including topics such as solid state systems (superconductors, semi-conductors), atoms and ions (including gravity gradiometers and gyroscopes, and computing and simulation engines). 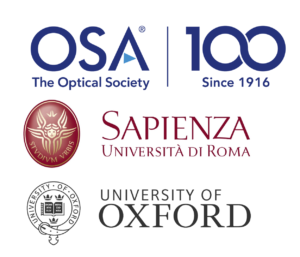 Profit of 2 major conferences in Italy!

The QIMV conference will be followed up by the 13th European Conference on Atoms Molecules and Photons (ECAMP13) in Florence, Italy, April 8-12, 2019.